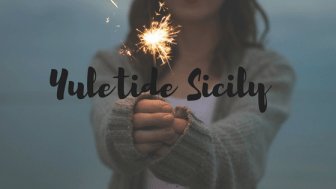 The festive season is always a beautiful time of the year to visit Sicily as it is filled with the colours, tastes and sensations of a traditional Sicilian Christmas.

A Yuletide Sicily offers visitors a unique way of experiencing the island which is inhabited by fewer tourists and is ultimately a more authentically Italian celebration.
December in Sicily is about traditions based around the nativity, Christmas markets with a little decadence thrown in.

Winter on the island over the past few years has been rather pleasant, apart from the chilly weather, a definite chill in the air, some rain it is quite rare to see snow be deposited around most of the island, apart from of the higher parts and the snowfields of the Madonie Mountains and Etna’s favourite skiing tracks.

The focus of December is as always about the food and traditions, the advent calendar is filled with roasted chestnuts in the squares, folk concerts around churches, food festivals dedicated to things like fried dumplings and other sweets. Wine is always featured in winter feats, and roasted pork is the featured meat dish.

As Christmas gets closer there impromptu folk music performances featuring traditional instruments like the Sicilian bagpipe or zampogna. Religious art is always a firm part of the Christmas season with exhibitions of detailed dioramas of the Nativity in Papier Mache, or even live reenactments of the nativity tale from the Bible.

Every major city has its own traditional characteristic Christmas markets filled with folk art, Christmas decorations and food and wine stands which are also common in other European cities.

In Sicily, the religious festivals are as always a substantial part of the events and include everything from the feast days of St Barbara, the Immaculate Conception, San Nicola di Bari, St Lucy, Santo Natale, San Silvestro (New Year’s Eve) through to and the Epiphany in early January.

The festive table is always filled with baroque bounties where the best of what is available is consumed liberally throughout Sicily.

Christmas celebrations are seriously religious here in Italy, but the true religion is not in a church but at the table, a hedonistic ritual which demands extensive preparation and consumption. Celebrations begin on the Eve’s. Yes, the most important meals are Christmas Eve and New Year’s Eve which stuff you with so much food you don’t want to eat for an entire year.

The Italian Cenone is the essence of gluttony.

A Sicilian menu is endless: starting with appetisers like bruschetta, arancini rice balls, fried bread batter, canapes, cheeses, ham and cold meats. Then a selection of at least two different pasta dishes which could be anything like lasagna, cannelloni, tortellini, farfalle or fusilli prepared with an array of rich sauces ranging from hefty béchamel flavoured with smoked salmon, porcini mushrooms or the classic Bolognese. The menu varies depending on which part of Italy you find yourself. Some believe each Vigilia must be celebrated only with seafood.

A typical menu can include main courses of roasted beef, pork, lamb, chicken, baby kid, wild boar, stuffed pigs feet, fried crumbed veal cutlets, fried baccalà or dried and salted cod, seafood salad, Russian coleslaw or lobster. Everything is washed down with red and white wines, topped off with a selection of exotic and winter fruits such as pineapple, dried figs stuffed with hazelnuts, oranges, mandarines.

Then there is the obligatory slab of Panettone or Pandoro Christmas cake for those who don’t like sultanas or caramelised fruit. Not to mention the endless desserts like drenched liquor dumplings, cannoli, profiterole cream puffs and alike!
Finally, there is a glass of sparkling Spumante for good luck, before a night of indigestion and antacids.

For those brave of heart and strong of stomach you might indulge in a shot of digestive liquor ranging from potent Grappa, sour as hell Amaro, lemony Lemoncello or deliciously light chocolate or hazelnut delights.

The Cenone is sacred, and it’s only once a year, thank goodness!

The abundance of Christmas provisions serves to be shared with equally abundant friends and family as the festive season is where the gregarious Italian culture finds its true expression, it is excessive but needs to be as you never know how many relatives will show up between Christmas and new years.

Here below is my own personal list of events in Sicily this December (2018) for you to pin and use as a guide on your Yuletide planning.

Buon Natale to everyone and to all a good Nye celebration.