I discovered the work of John Keahey by accident a few years ago when his first book about Sicily (Seeking Sicily: a cultural journey through myth and reality in the heart of the Mediterranean) randomly popped up on my Amazon search for books on my usual trawl through the internet for inspiration.
After a quick, effortless click, John Keahey’s book was instantly on my e-reader. This turned out to be a beautiful discovery, and to my delight I soon found this book to be only the last in a succession of many dedicated to Italy.

It was apparent I’d review it for Sicily Inside and Out and I definitely wanted to do an interview as I had with other excellent authors who have been inspired by Sicily and in turn become an inspiration to me.
John Keahey is a retired American journalist who has gradually fallen more and more deeply in love with Sicily through the years ever since his first visit in 1986.
I sent an email to Keahey’s publisher, but I didn’t get an immediate response and then found him on Facebook and messaged him. He said yes, to my surprise and I emailed him some questions. Here is the original article about his first Sicilian themed travel book Seeking Sicily.

After that, we became virtual acquaintances on Facebook, his comments, likes and questions about my Sicilian posts and on the struggles I’ve had writing my first book have become most welcomed. I like to think we are friends, even though we haven’t met in person just yet, we still encourage one another through our shared love of writing and this complex Mediterranean island.

When he said he was working on a new book about small Sicilian villages, my heart skipped a beat at the prospect of yet another excellent book about Sicily and I’m happy to report it is now available.

This time I preordered on Amazon and on the day of its release Sicilian Splendors: discovering the secret places that speak to the heart magically appeared, automatically downloaded onto my e-reader. 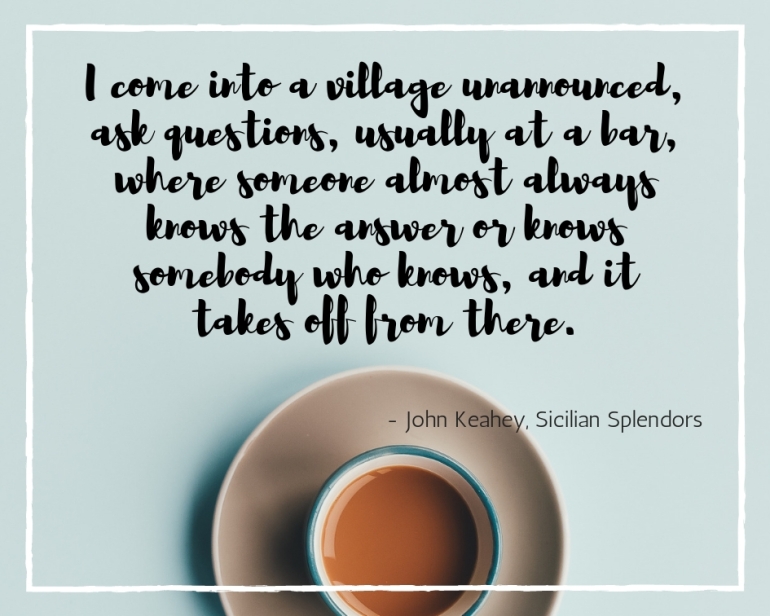 What makes John Keahey’s approach to Sicily so special is his dedication to slow travel. He explores a place through its history, people, food, landscape and in turn crafts his own personal story which is a pleasure to read.

John is an exceptional traveller and writer, not a simple tourist blindly ticking things off a senseless status driven bucket list he is drawn to a place through his own personal interests and he then lets chance and his ability to connect with people around him to guide him.

In short, Keahey is exploring Sicily precisely as it should be, driving by car to small non-touristy places, making contact with the locals, pulling out threads of history, literature, culture and current events that intrigue him and then following them back to their original source. His journalistic approach is refreshing and offers up many fascinating insights. 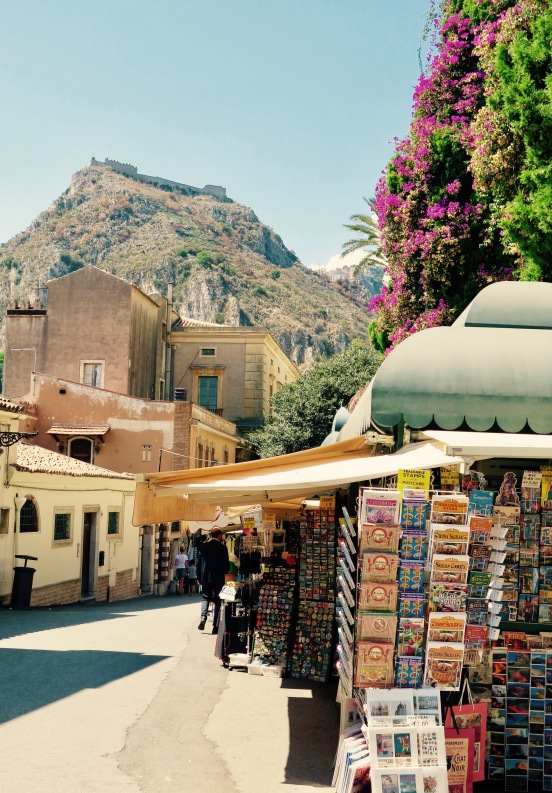 It is a pleasure to see Sicily through John’s eyes as he is always so open to the world around him, he sits with the pensioners in the piazza, knocks back double espressos and cornetti like a local, puffs on Italian cigars, savours every meal and tries to understand Sicily more and more deeply with every visit.

He’s never in a hurry, always stops to ask polite questions and is opened to the art of spontaneity and surprise which never disappoints. Sicily is definitely a place which offers its best when visitors give themselves space to be creative. It is difficult to plan anything in Sicily as things tend to develop organically and randomly.

Whenever he visits Sicily, he tries to live it from a locals perspective, and the result is a wonderfully personal travelogue which reflects the true nature of Sicily. It is always a pleasure to travel with John Keahey, he makes is wonderful company and his passion is contagious.

I hope to meet John Keahley on his next visit to Sicily and finally offer him a double espresso and cornetto while secretly hoping to get a Sicilian themed trilogy from him.

I was even surprised to see my name in the acknowledgements at the end of Sicilian Splendors, which is undeniably kind and I thank him very much.

The new book Sicilian Splendors: Discovering the Secret Places that Speak to the Heart has just been released this November (2018) and is available on Amazon (also in audio book format).

2 thoughts on “Sicilian Splendors: discovering the secret places that speak to the heart”