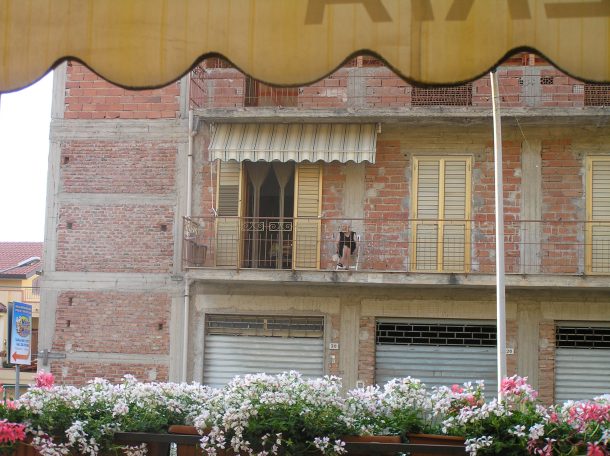 It is common in Sicily to see people living in unfinished houses or apartments with exposed bricks, cement and reinforced steel poking out dangerously like rusty modern sculptures on roofs left behind as it to say:

‘I could build a second storey if I feel like it, ora vediamo …’

Yes the quintessential loitering phrase ‘now we’ll see,’ which is a kinder way of not saying an absolute ‘no’, there’s a tad more hope here, ‘ora vediamo’ … perhaps when hell freezes over. Trades men are particularly fond of this expression, I’m sure it’s a part of their coat of arms.

In reality, idleness is only part of the reason behind these half complete buildings, it has more to do with Italy’s bizarre construction laws and tax evasion. Since it is terribly expensive and complicated to build so things are done rather gradually. Also in general Sicilian’s don’t like taking out home loans and so choose to pay with cash and do work in dribs and drabs as a way of saving money.

A house ‘in construction’ doesn’t have any taxes attached to it, hence the Sicilian’s abode can become an eternal work in progress to avoid hefty fees and excesses.

If you inherit an old house any renovations are done on the sly as you need not pay anything if you live in an animal barn or nineteenth century shack, as results in the original deeds of the house, don’t in gods name update the strata title as you will end up paying the same as Berlusconi does for his expansive Villa Arcore outside of Milan.

It’s best not to rock the boat and leave everything buried in the eternal labyrinth that is Italian bureaucracy.

It is all terribly messy and dangerous but Sicilian’s have grown used to living inside a construction site. There’s a hidden artistry to it all.