The cult of the Patron Saint was developed by the early church which used the established pagan desire for multiple gods to lead people towards the Roman Catholic religion.

Reinforced by the Spanish domination of eighteenth-century Sicily, the Italian peninsular still finds itself celebrating endless saintly patrons during the year, a tradition also widely practised throughout Andalusia today.

This winter together with Christmas Sicily celebrates the feasts of its three most influential female icons in a powerfully interconnected feminine trinity.

Beginning with the annunciation of  The Madonna which welcomes the miracle of the immaculate conception on the eighth of December (a public holiday here in Italy, it is actually considered bad luck to work on this day).

The Virgin Mary has a particular connection to Sicily as the patron Saint of Messina and many other towns on the island, together with Saint Lucy of Syracuse on the thirteenth and later in February St Agata of Catania.

Santa Lucia’s story begins in the fifth century when the aristocratic Lucy goes with her mother to the grave of Saint Agata to pray for a cure for a mysterious ailment which has afflicted her mother. During her vigil, Lucia falls asleep and has a vision of Saint Agata who calls her into religious life. Making a vow to follow God, Lucia’s mother was cured.

Although Lucia was already betrothed to a pagan man she gave away her wealth to the poor and was promptly denounced as a Christian by her would-be fiancée in the staunchly anti-catholic period of the late Roman Empire. Her trial before a Roman official resulted in a series of miracles and a martyrdom which has made her a beloved part of the Sicilian culture ever since. 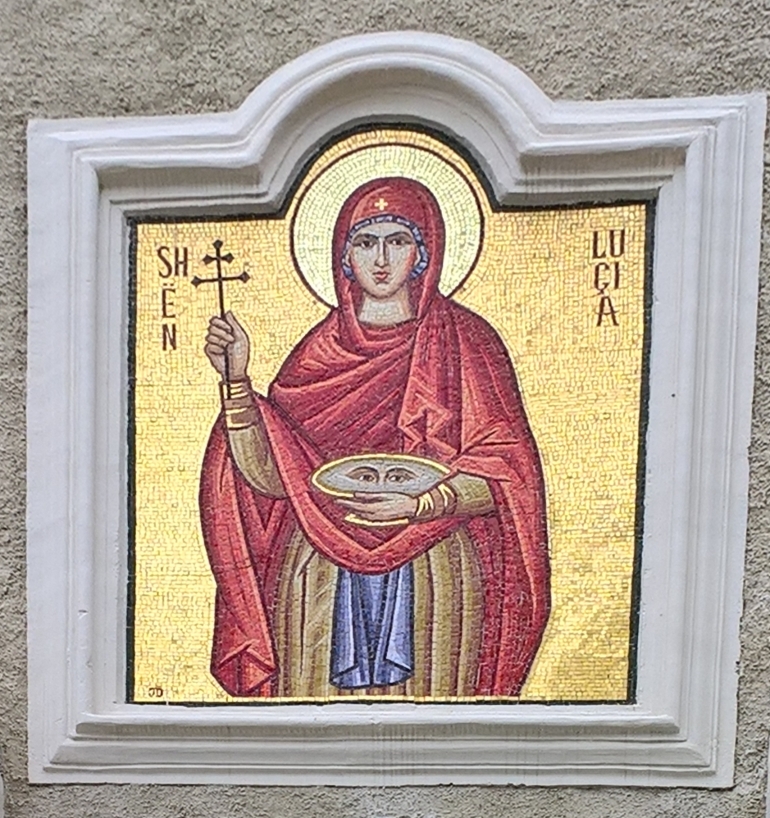 Born and raised in Sicily Santa Lucia is venerated throughout the world and has many colourful and stunning miracles attributed to her. Staunchly refusing to renounce her faith even under torture she proclaimed her body would be sacrificed only by her soul’s consent. Ordered by the Roman prefect to be forced into prostitution her body suddenly became so heavy that not even ten men were able to lift her.

The Saint was tortured and eventually decapitated, but nothing was able to make her renounce her faith. Contrary to popular belief her eyes were not removed as part of her tortures. Popular iconography in major artworks often depicts the Saint with a pair of eyes on a tray, this symbolism associated with her came much later as she became known as the patron saint of sight, stemming from the origins of her name, Lucia meaning light.

Lucy’s feast is associated with many culinary traditions, as is quite common in Sicily, food preparation becomes a manifestation of the seasons and the deeply rooted religious festivities during the year. As is the case with many of Sicily’s desserts which were first made by religious sisters in convents to celebrate a particular saint or event in the church’s calendar, the dishes consequently becoming part of the rich Sicilian palate.

For Santa Lucia, it is common to prepare arancini rice balls and a special cereal-based savoury or sweet soup known as the Cuccia.

The Cuccia recalls one of Lucia’s miracles which occurred during the Spanish period when Palermo was suffering through a famine after a disastrous wheat harvest left the city without its main staple, bread. The people begged Santa Lucia for a miracle and were promptly granted one in the form of a mysterious ship carrying a load of wheat which the locals took, boiled up and ate to avoid starvation. So every year on the thirteenth of December the Cuccia is consumed in memory of this miraculous event.

At Syracuse the hometown of Saint Lucy the locals make a sweet wheat-based dessert, their Cuccia is made of grains softened after being soaked in water for a few days, then boiled and flavoured according to personal taste. This cuccia dolce is combined with ricotta and chocolate cream, vin cotto (wine conserve), cinnamon, chocolate powder, pistachio and candied fruits.

Each province has its variations of St Lucy’s commemoration, for lovers of hearty savoury soups, in the province of Messina the cuccia is prepared with thirteen different lentils each with its own special dedication to this saintly Sicilian woman. In reality, she is one of three female saints who are an integral part of the islands, traditional heart, together they are Mary, Lucia and Agata, an unofficial Sicilian trinity.