Sicily is famous for its ceramics, designed in the classic Maiolica glazed style with delicate baroque patterns. One of the most characteristic pieces of Sicilian ceramics and those who stimulate the most interest from visitors are the Moorish head designs, which consist of pairs of pots, cups or jars which depict a fair-skinned woman and a man with distinctly North African features.

Most foreigners are perplexed by this extravagant couple, which is the proud features of many exquisitely groomed balconies and gardens all over the island.

Behind this duo is an intriguing mix of mythology and Sicilian history. Theirs is a love story akin to Romeo and Juliet or Tristan and Isolde, with a surprisingly gruesome mixture of violence and folly. The story takes us back to the end of the Arab period in Sicilian history, it has been retold many times, but the characters at its heart, are an inspiration for many artists. 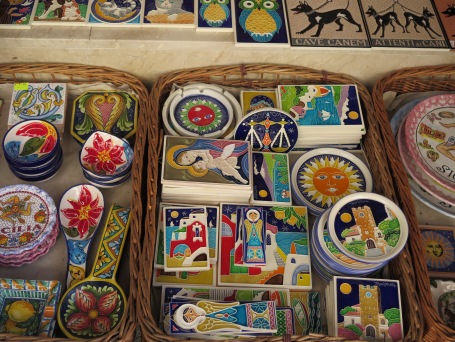 The original folk tale behind the ceramic heads comes from Palermo and tells of a Saracen merchant who falls in love with a beautiful local girl. Together they start a passionate love affair until the girl discovers her lover has a wife and children waiting for him in his homeland.

In a fit of jealously and rage, she murders him in his sleep, cutting off his head so that her lover would stay with her forever. The girl uses the head as a vase to grow a beautiful basil plant. Others seeing her flourishing plant, forge themselves the colourful clay head pots in an attempt to recreate the bountiful fertility.

A more romantic version of the Moorish heads tale comes to us from Messina. Every summer as part of the elaborate mid-August celebrations dedicated to Messina’s patron the Virgin Mary, the pagan founders of the city are also featured in the religious procession.

The gigantic eight-meter tall papier-mâché statues of Mata and Grifone riding on horse back date back to1723 and reenact the arrival of Roger the first of Sicily to Messina, after the island was liberated from the Arab domination in 1071. Roger, I was a Norman nobleman he became the first count of Sicily and his descendants continued to rule Sicily until 1194.

In 1547, when archaeological excavations outside of Palermo first unearthed the remains of mini elephants and hippo’s which used to roam prehistoric Sicily lead to the popular belief that Sicily was founded by giants. The elephant skulls were also taken as proof that the Cyclopes from Homer’s Odyssey existed. The elephant skulls peculiar shape and a characteristic single hole at the centre seemed to confirm the animal in question had a single eye.

Many Sicilian academics believe Messina’s Mata and Grifone are manifestations of ancient nature gods, the pale-skinned Mata a version of the ancient Greek myth of Persephone the daughter of the goddess of nature Demeter who was kidnapped by the dark god Hades, ruler of the ancients afterlife. There is a strong connection to many other pagan gods representing contrasting elements which coexist such as night and day, male and female and winter and summer.

The popular folk tale told at Messina is a love story, with a staunchly catholic flavour and no bloodshed. Mata was the daughter of a Messinese caught the eye of Grifone a general in the invading army who had just conquered Messina. Pledging his undying love for Mata, he asked for her hand in marriage, which was granted with the understanding Grifone would convert to Catholicism, which he did and the two went on to become rulers of ancient Messina.

Probably the most famous version of the gruesome Moorish heads story is the one retold by Boccaccio in the Renaissance short stories from his Decameron. Boccaccio sets the story directly in Messina, the main protagonist is Lisabetta or Isabella an orphaned noble girl who is jealously guarded by her three brothers.

Isabella falls honestly and spontaneously in love with Lorenzo, a local boy with modest means. Their love affair goes on in secret until the three brothers discover Lisabetta leaving to meet her lover and decide to put an end to the relationship to avoid tarnishing the good name of the family. The brothers lead Lorenzo out of the city and murder him, hiding his body in a shallow grave and on their return home tell their sister Lorenzo simply left on business.

But when Lorenzo is absent for too long Lisabetta becomes desperate with worry. One night Lorenzo appears to Lisabetta in a dream telling her he was killed by her brothers and describing the spot where his body is buried.

Determined to find Lorenzo, she obtains permission from her brothers to go on a trip to the countryside with her female servant. She finds Lorenzo’s body and unable to give her lover the burial he deserves and insane with grief she cuts off Lorenzo’s head. At home, she hides the head in a vase and plants some basil in it. The plan blossoms, watered by Lisabetta’s tears.

Isabella’s behaviour alarms the neighbours and her brothers discover Lorenzo’s head. They get rid of the evidence of their crime, leave Messina and flee to Naples leaving behind a distraught Isabella to die of a broken heart.

In 1849 the sad tale of Isabella of Messina was revived by the artist Everett Millais who created the first painting in the romantic Pre Raphalite style. Lorenzo and Isabella are filled with hidden messages and subtle phallic symbols which have intrigued art lovers for generations.

Another imminent Pre Raphaelite artist Edward Coley Burne Jones painted his portrait of Isabelle and the pot of Basil in1867. The painting of Isabelle is an emotive work of art depicting the moment the girl weeps over her basil plant towards the end of the story. This masterpiece draws on ancient mythology, recalling elements of classical folklore, for example, the ancient Greeks and Romans believed basil was associated with hatred and according to folk beliefs the plant had to be sown with swearing and ranting. The ancient Egyptians used the herb in the embalming process, making it also a symbol of mourning.

Romantic poet John Keats used the story as the inspiration behind his poem Isabella, or the Pot of Basil. In the hands of the highly idealistic romantic Keats, the tale became a love story corrupted by the pride and greed of Isabella’s brothers who treated her like ‘ancestral merchandise.’

Keats’ version is set in Florence but his poem is filled with deeply violent imagery before and after the murder occurs and it quotes the ancient Greek myth of Perseus on his quest to kill Medusa the gorgon serpent headed monster who is at the centre of the ancient Trincaria a symbol still used to represent Sicily today.

Behind every work of art, there is always a story, Sicily takes this aphorism to an extreme with its history filled with violence, tragedy and loss. The baroque ceramic Moorish heads are the artistic expression of the islands rich yet dark mythology.

One thought on “The truth behind Sicilian ceramic Moorish heads”