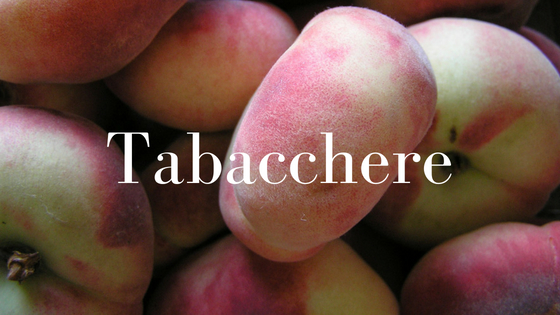 One of the most sumptuous fruits of the Sicilian summer has to be the Tabacchere, a strange little squashed furry peach packed with enormous flavour.

I first saw these seemingly insignificant mini fruit at the fruit and vegetable stalls at the open air markets and took them as an inferior version of regular peaches.

I was seriously mistaken as the Tabacchere are baroque masterpieces of the Sicilian estival fruits. They taste unlike any other peach a concentration of delicate sweetness with a pungent aroma that is intoxicating. 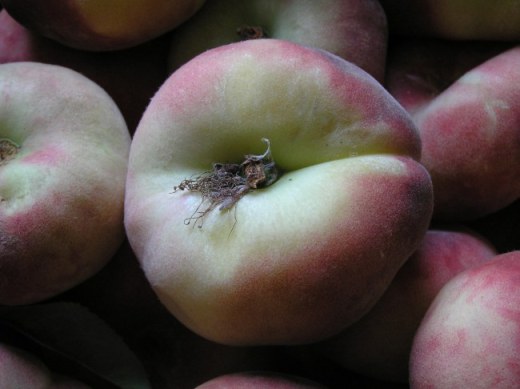 A case of Tabacchere is a generous gift a real luxury and can cost up to three times the price of regular peaches. A house drenched in the perfume of these peaches is a sensual pleasure filled with the sweetness of summer sunshine, which lingers in the air and in the mouth. 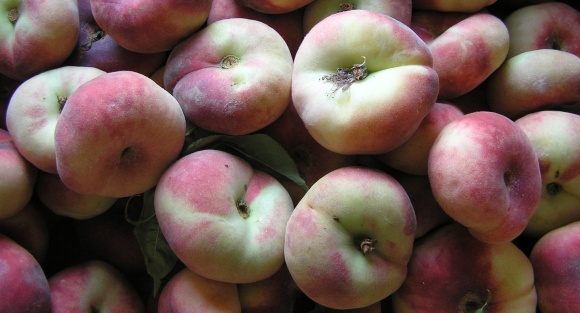 Also known as saturn, snuffbox and tango or doughnut peaches Tabacchere have been grown on the slopes of Mount Etna since the early 1800’s. The rich volcanic soil and the sunshine makes these peaches thrive.

Since they do not keep for long and due to their odd size they are generally consumed locally during the short growing season. They ripen quickly and are very odd shaped and fragile so it is difficult to find them out of Sicily.

These delicate little pieces of flavoursome decadence are characterised by a thin outer skin which easily slips off to reveal a light pale flesh with a strong scent of peach like a bouquet of roses. Its tiny Tabacchere pip makes it nearly entirely edible.

Peach cobbler is always on the menu when they are in season, any recipe that will make the most of this surprising abundance, to share them with extended Sicilian family and friends.

Everyone should experience the heavenly Tabacchere.

This year I have also frozen some so I can sprinkle them in my muffins, blend them in smoothies and use them in fruit tarts once the summer is over.

Their taste and fragrance is second to only one other now rare ancient variety of Sicilian peach imported by the French to Sicily which is now almost impossible to find.

While enjoying the abundance of peaches in the stores and on the fruit trucks which bring fresh fruit from the Catania markets direct to our small town this summer I was reminded of another succulent summer fruit I tasted a few years ago.

The other morning while at my mother in laws property in the country side I was overwhelmed by a strong perfume of peaches.

At first I thought they were the crate of tabbachere we had bought at the markets, but we had already finished them. For the next few days I continued to smell this wonderful odour.

The mystery was resolved by my husband who reminded me of the little tree he had planted above the house of Sbergia or Smergia peaches.

A friend from the Niceto Valley in Messina province where these peaches seem to thrive, had given us a plant a few years ago and they are finally producing fruit.

The towns of Torregrotta, Monforte San Giorgio and San Pier Niceto produce a modest crop of these peaches in July and August.

These tiny round fruits with smooth skin and white pulp are packed with intense flavour.

The Sbergia production is limited in small pockets in the provinces of Messina, Catania and Reggio Calabria because of the small dimensions of the fruit, their extra delicate nature they really cannot be produced in massive quantities.

So the Sbergia becomes a rarity to hunt down and taste in the summer.