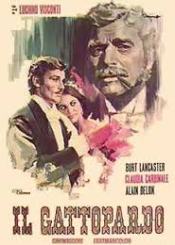 Giuseppe di Lampedusa’s The Leopard (Il gattopardo) is my favorite Sicilian novel of all time. The sumptuous world of the Prince of Salina is a precious link to Sicily’s baroque aristocracy. It also inspired one of the best international cinematic productions with the classic 1963 film adaptation directed by Luchino Visconti starring Burt Lancaster as the prince.

The Leopard’s author was a bit of an anomaly in himself, a painfully shy, reclusive, Sicilian nobel, whose novel was finally published after his death at the same time as Jack Kerouac’s modern free spontaneous prose masterpiece On the Road exploded onto the scene in the states. You could not find a work so contrary to its times as this elaborate historical novel, yet it is still the most poignant and truthful portrait of the Sicilian mentality, I’ve ever read.

The Leopard is an essential guide to understanding the nature of the Sicilian character.

I’m even going to bore you by sharing some quotes and points which I had to edit out of my travel book because I found myself ranting on too much about The Leopard. I implore you, most adamantly to read this book if you love and want to understand Sicily.

In chapter four of The Leopard titled Love at Donnafugata, Lampedusa illustrates why Sicily and Sicilians are the way they are. In this chapter the main character Don Fabrizio is visited by Cavaliere Chevalley, an official delegate of the royal house of Turin who invites the Prince to become a minister in the first government of the new Italian Republic. The Prince refuses and in a complex speech to Chevalley he explains why the changes in Italy will have little effect in Sicily and vividly describes the true nature of the islanders.

According to the Prince, Sicilians are products of their own history and the elements which have shaped their culture are the very ones which have shaped Sicily politically and physically. ‘Sicilians are accustomed to a long succession of rulers who were not of their religion nor spoke their language. If they had not learned to support the foreign influences Sicilians would never have coped with the invaders.

The stoic adherence to a doctrine of simply out living invader’s has created a severe lethargy in the Sicilians’ character which makes them timeless. ‘In Sicily it doesn’t matter about doing things well or badly, the sin Sicilians never forgive is simply that of doing at all. The island is very old, for many centuries Sicilians have been bearing the weight of superb, powerful civilizations, all from outside, for centuries Sicily has been a colony. This is not a complaint, it has created a fault in the Sicilian’s character.’

‘Sicily has become worn out and exhausted by this weight. It is because of this that Sicilians crave sleep and they will always hate anyone who tries to wake them, even in order to bring them the most wonderful gifts.’ According to Lampedusa Sicily suffers from an exotic type of sleep illness, which is routed in a sense of self denial and escapism. It is Sicily’s sleep that keeps the society revolving around itself, in a cycle that never wants to be broken.

Sicilians’ sleep creates a strange sort of limbo, an alternative perspective which is neither part of this life nor the next, but which has more in common with the absence of life rather than its living. ‘All Sicilian self expression even the most violent is really wish fulfilment; their sensuality is a hankering for oblivion, their shooting and knifing a hankering for death, a desire for voluptuous immobility that is for death again, their meditative air is that of a void wanting to scrutinise the enigmas of Nirvana. From this comes the power of certain people, those half awake to cause the dragging of time in Sicily’s artistic and intellectual life; novelties attracting attention when they are dead, incapable of arousing vital currents; from that comes the phenomenon of the constant formation of myths which would be venerable if they were only really ancient, but which are really nothing but sinister attempts to plunge them back into a past that attracts them only because it’s dead.’

Then there are the shaping elements of the natural environment which leave their mark on the Sicilians. Lampedusa comments on how: ‘the violence of the landscape, the cruelty of climate, this continual tension in everything and even the monuments of the past, magnificent yet incomprehensible because they were not built by Sicilians and yet surround them like lovely mute ghosts. All those rulers who landed at Sicily, who were at once obeyed, soon detested and always misunderstood; their sole means of expression, enigmatic works of art and taxes which were spent elsewhere. All these have formed Sicily’s character which has been so conditioned by events outside the population’s control as well as by a terrifying insularity of mind.’

Sicily’s contrasting elements are reflected by a deep paradox in the Sicilian’s character which comes from the tremendous pride they have for their island. ‘Sicilians never want to improve for the simple reason that they think themselves perfect; their vanity is stronger than their misery. Every invasion by outsiders whether so by origin or, if Sicilian, by independence of spirit, upsets their illusion of achieved perfection; having been trampled on by a dozen different peoples they think they have an imperial past which gives them a right to a grand funeral.’

Sicily has been the perceived jewel of many conquerors who have seen the island’s treasures and have tried to overpower and develop Sicily to fit their own agendas, with no success. ‘How many Moslem imâms, how many of King Roger’s knights how many Swabian scribes, how many Angevin barons, how many jurists of the most catholic King have conceived the same folly and how many Spanish viceroys too. … Sicily wanted to sleep in spite of their invocations; for why should she listen to them if she herself is rich, if she’s wise, if she’s civilised, if she’s honest, if she’s admired and envied by all, if in a word she’s perfect?’

The most authoritative translation of Giuseppe di Lampedusa, The Leopard is translated by Archibald Colquhoun and is available on amazon and now also as an ebook published through Random House.

Be sure to read this great essay about the literary influence of The Leopard titled The Leopard turns 50 written by Rachel Dandy and published in the New York Times on the fiftieth anniversary of its publication in America.

Next on Literary Islands, something more contemporary. An interview with travel writer Brian Johnston and his wonderful Summer in Sicily.