During the Giudei’s procession, I am introduced to a local academic and former mayor of San Fratello, Professor Salvatore Mangione. He offers me a drink at a small bar, together with other acquaintances. This gives me a chance to get off the crowded street and out of the confusion. I stand at the bar for a while, sipping a glass of peach nectar and listening to Mangione’s explanation of the Giudei.

The Professor is a proud Sicilian and talks with great ease in what seems like a finely rehearsed paragraphs of a prepared speech. I wonder for how many Diavolata’s he has been delivering his lecture to visitors. He leans with his elbow on the bar top, his golden orange Crodino bitters aperitif in his hand, and with an unaffected air of authority, he gives his performance in an impromptu tone.

He notes how the Giudei are characters in a sacred drama which has a strong cathartic element to it. They are like members of a secret confraternity who are entrusted to their roles in an age-old mystery play. Like the religious celebration, even their costumes are sacred, to be worn only during the Holy Week celebration.

The origins of the event aren’t clear. Professor Mangione suggests that the festival might refer to a social rebellion in San Fratello’s history which has long since been forgotten. The primary indication of this comes from the fact that at one time only the peasants were allowed to dress as Giudei, and the upper class allowed three days of practical joking to pass without retribution.

The Festa has a history of violence, and the Giudei’s drunken revelry creates a significant disturbance in the town. Numerous police reports have been filed against the masked revellers through the years, and there have been multiple attempts to ban the event. But despite efforts to halt the celebration, the Giudei continue to punctually re-appear after every prohibition, in even greater numbers than previously. And so the performance has continued to this day uninterrupted, even during the two World Wars. 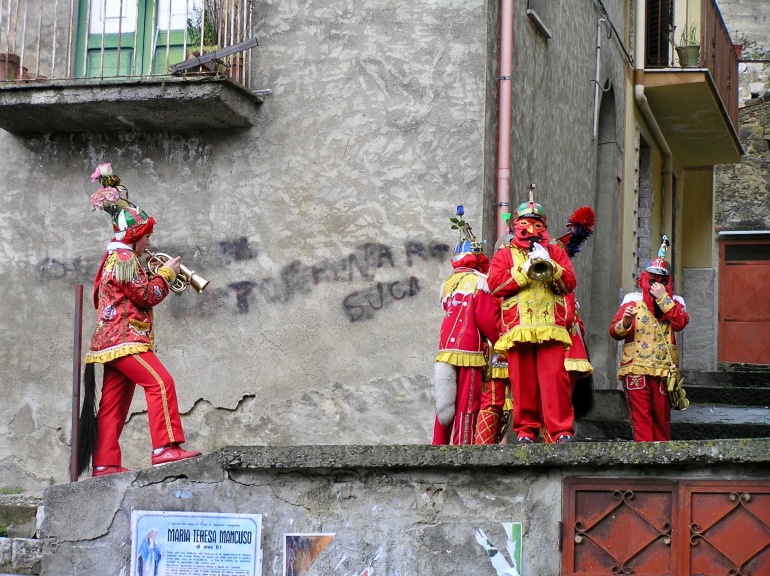 As the Professor finishes his little lecture, a young child at the back of the bar lifts the hood of his little Giudeo costume, and puckering his lips, he trumpets loudly on his father’s bugle horn. Taking this as a signal to end his presentation, Professor Mangione smiles, sips the rest of his drink, and confidently states that the Diavolata is a tradition that will never end, as long as the children have such enthusiasm.

Walking out of the bar, I see that the side streets, the sidewalks and the street corners are overflowing with men in masquerade. They are playing an endless stream of tunes, which intermingle with what seems to be one long sustained raspberry, creating an aural overload.

For a second I hear what I think is an emphatic triumphant march, but before I can listen to it properly, I grab onto a distorted waltz, and then I’m distracted by a strange polka; another group is distorting a selection of traditional songs, such as Torna a Sorrento and O Sole Mio.

It is such a strange, playful musical collage, the way the trumpeters pick up bits and pieces of popular tunes and distort them, creating as much colour and disarray as the celebration itself. In amongst the noise and exuberance, I get caught up in the enthusiasm of the moment, before being suddenly struck by the realisation that nothing of this makes sense. I think it’s not meant to have a particular meaning; it’s pagan, ritualistic and hedonistic all at the same time.

The Giudei begin their celebration around eleven o’clock on Good Friday morning and continue their rampage around San Fratello, playing their eclectic music, blocking traffic, and creating general confusion. As the feast continues, the men begin to mix their playing with alcohol and become ever rowdier, and then start to play practical jokes. Around midday, the Giudei start to peter out at the end of the main street, to turn around and mingle at bars and side streets, or chat with friends and family in the main square, where most of the confusion is focused.

The birth of this grotesque Good Friday carnival, which corrupts the original religious celebration, can be found in the local history. San Fratello’s origins can be traced back to the time of the ancient Greek domination of Sicily when the town known as Apollonia was founded in three hundred and twelve A.D. Later, with the conquest of Sicily by the Norman Count Roger I, the town became the site of a Lombard colony.

It was Count Roger’s second wife, Queen Adelaide of Monteferrato, who ruled over the hamlet in the twelfth century, creating a unique settlement for immigrants from Northern Italy, who kept strong ties to the French language and culture and to the Catholic faith.

In the colony, a unique dialect based on French evolved, which is still spoken today. The dialect of San Fratello is entirely different from the traditional Sicilian dialect of North-Western Sicily. This language is a testament to the migration to Sicily, of colonists with origins in the north of Italy, such as Piedmont, Lombardy, and Emilia Romagna, during the Norman domination.

The dialect itself is a mix between the idiomatic local dialect of the Monferrino and the dialect of Normandy. It is a strange hybrid that sounds elegantly French, yet is tainted heavily with the harsh, local rugged dialect of Sicily.

From the Norman occupation of Sicily (1061-1194 ) up until the Sicilian Vespers uprising against the French in 1282, there was a gradual influx into Sicily of colonists from Northern Italy. In general, the towns where these Norman people settled are found in the provinces of Messina and Enna. Some of the Sicilian cities strongly are influenced by French culture, particularly in the local dialect, apart from San Fratello, include Novara di Sicilia, Fondachelli Fantina, Sperlinga, Nicosia, Aidone and Piazza Armerina.

A testament to the early Norman colony in and around the town of San Fratello is the small temple located on Monte Vecchio, which is dedicated to three early Catholic martyrs, Saints Alfio, Filadelfio, and Cirino. It is from these three Brother Saints, or Santi Fratelli that the town gets its name. 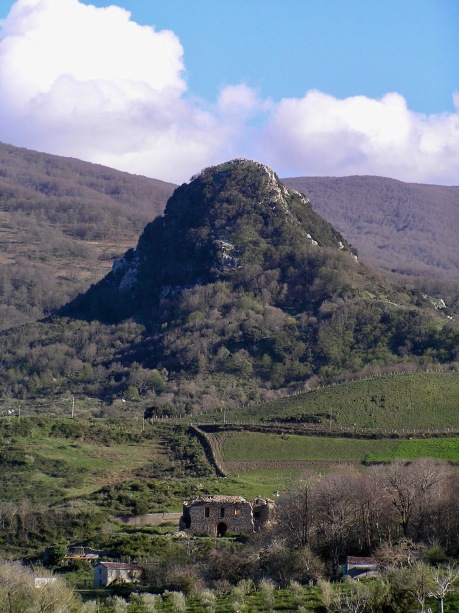 Before the Norman domination, Sicily was under Arab rule for some two hundred and thirty-three years. Contrary to popular belief, Arab Sicily was an educated and tolerant society, especially concerning other religions. Even though Islam was the dominant religion, there were strong communities of Jewish and Catholic faith allowed to exist side by side with the dominant ruler’s religious system of belief.

The Norman conquest of Sicily was based on, among other things, an intense desire to bring Catholicism to the island and remove other religions. It is with this historical context that the Giudei celebration at San Fratello takes on a sinister quality.

The Giudei (or Jews) of the Easter celebration of San Fratello can be seen to represent a grotesque parody of the ethnic minorities of the Arabs and Jews in Sicily during the Norman period. The Norman colonists of the town created a celebration to exorcise Sicily of non-Catholic minorities.

As the tradition of the Diavolata evolved into part of San Fratello’s culture, the original significance and purpose of it was slowly forgotten, and this celebration became viewed as a reflection of the nature of the local inhabitants. With the spread of Catholicism in Sicily, the irreverent mockery of the Giudei festival resulted in the widespread belief that the San Fratellani were ‘tutti Turchi,’ that is, they were “all Turks,” the term ‘Turk’ in Sicilian referring to enemies of the Christian faith.

So from its original function, the festivities at San Fratello have to a certain extent backfired, inadvertently linking the town to a non-Christian system of belief and creating one of the most undeniably unique festivals in the world.