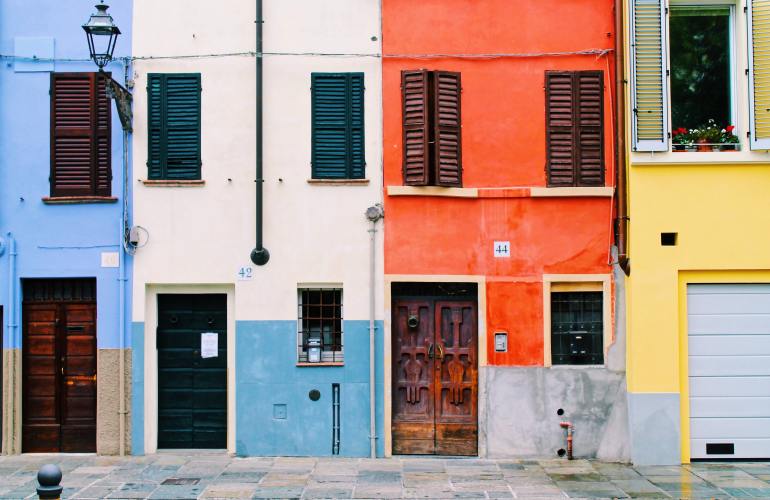 It’s nearly Christmas, the end to a disastrous year for the world as many countries are stepping in and out of various shades and types of lockdowns. With vaccines in arrival and virus mutations on the news, it’s a shady time in history.

Italians are scrambling to do their Christmas shopping, preparing festive menus even though many families will be separated this year. It is a difficult time which is being lived by most Italians with their usual mixture of strength and joie de vivre.

Most of the world will stay home for New Year and Christmas which will be filled no doubt with slices of panettone or pandoro and glasses of prosecco around the dining table.

It doesn’t feel like Christmas, but we are doing our utmost to make the best of a terrible situation. There are so many more Christmas decorations and lights than previous years, and Italian’s will never scrimp on the food on their table.

On a personal note, I’ve literally had a shitty few days, after my plumbing backed up and flooded a downstairs bathroom. You have no idea how impossible it is to find a plumber the week before Christmas.

Hell, I’m even looking forward to watching some Cinepanettone anything to take my mind off the current situation.

The Cinepanettone farcical genre began in the early 1980s and is reminiscent of the corny Carry-On movie franchise which was popular in 1960’s Britain. Incidentally Carry-On is in the process of being remade after the death of one it’s most popular stars, Dame Barbara Windsor.

A typical Cinepanettone is set around the festive season with a large cast of characters made up of popular mainstream Italian actors who are usually bungling, wealthy and presumptuous. These strictly middle-class stereotypes tend to visit glamorous or exotic places.

It’s all so bad that it’s actually good. And loved by the Italian public. It’s like watching reality television, you find yourself watching despite your better judgenent to see how bad it’ll actually get. Then after the program ends, you berate yourself for wasting so much of your time.

Cinepanettone is like eating junkfood. Sometimes you crave it but it’ll always give you indigestion.

The two unabashed kings of this genre are Massimo Boldi and Christian De Sica. Together they have made twenty-six Cinepanettone movies together including this years: In Vacanza su Marte (Vacation on Mars).

Yes, it seems Boldi and De Sica have run out of locations for their Christmas vacations that they are heading to Mars and it’s all directly streaming on Amazon Prime this year!

Boldi a Milanese comic and Roman actor De Sica, son of Italian neorealist director Vittorio De Sica are masters of wordplay, slapstick, cross-dressing and basically anything that will get a laugh. Their style is reminiscent of many other tremendously popular comic duos throughout cinematographic history from Laurel and Hardy, to Abbot and Costello, Dean Martin and Jerry Lewis and other Italian artists like Franco e Ciccio and Bud Spencer and Terrance Hill.

This very visual, physical and at times, innocent type of humour has always been widely popular in Italy. It’s actually quite endearing as this simple humour indicates a particular childlike spirit inherent in Italian culture.

In Italy, you will often see old black and white movies of Laurel and Hardy on the television as they are still very much loved and revered. As is Charlie Chaplin, loving refered to by the nick name Charlot.

While Boldi and De Sica dominate Cinepanettone, they don’t have the exclusive rights to the genre. Many other mainstream directors have tried their hand at this type of comedic celebration and have revived this sometimes tired genre. For example, 2019’s movie Il Primo Natale (Once Upon a time in Bethlehem) from Sicilian comedian’s Ficarra and Picone is a hilarious retelling of the Christmas story.

Ficarra and Picone’s style reflects a new comedic generation which is filled with brilliant farce, satire and wordplay without the need or desire to become vulgar. All of Ficarra and Picone’s recent movies are intelligent reflections of the ironies of Italian culture, particularly in the southern Italy of their native Palermo.

Italian’s are creatures of habit, they enjoy their own personal rituals from the culinary delights of seasonal eating to Saint day celebrations and the San Remo song festival.

So this year, when family and social gatherings are limited, no doubt Cinepanettone will have a deeper meaning for Italians.

Apart from being the usual typically Italian phenomenon filled with actors, comics and showgirls, all wrapped up for Natale.

This cheesy cringy Christmas genre will offer a little bit of pure escapism with a hint of vulgarity. After all who doesn’t love a fart joke.

Lord knows we need a bit more laugher and childlike wonder after such a grim year.

12 thoughts on “Why we need Cinepanettone”