There is something humbling about participating in a traditional olive harvest. Every couple of years I get to help out my husband and his family gather olives to make oil for our own family. Everyone loves the taste of good high quality oil and simply refuse to do without it.

The harvest is only a few days of work but it unexpectedly makes me feel connected to my ancestors who once went through the same actions, as well as many other people who participate in this ritual all around the world. For me it is a labour of love, an ancient rite which has been undertaken since biblical times.

Commercial olive oil production happens all over the world with genetically modified trees, planted over hundreds of kilometres from Australia to the US and Spain with automatic machines who shake every last olive off each tree.

A smaller olive harvest has more soul to it, there is something satisfying about doing physical work, gathering this ageless fruit the same way it has always been done. Beating the branches with poles to make the ripe olives fall, laying down the nets to catch them, being careful not to carelessly lose one pip. 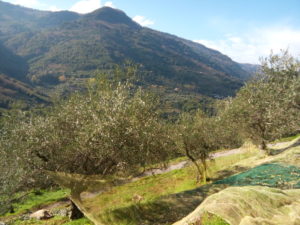 Blanketing the ground with the nets known as lenzi in the Sicilian dialect, there is something gentle and maternal about wrapping the earth with them. The word lenzo reminds me of the Italian world lenzuolo or bed sheet, as if laying them down prepares the earth for the sleepiness of the imminent winter.

I’ve heard Lenzo used as a surname here, like so many other made up names taken from every day objects and places in Sicily. I’m always amused when many people with a Sicilian background fall into the trap of believing they could be aristocrats because they are named after a town, falling for the propaganda of fake family crests, when most probably, there was a foundling child in their ancestry.

In the poverty and over population of nineteenth century Sicily it was common for unwanted children to be anonymously abandoned in the revolving doors of the church wheels. No one knew neither mother nor father so the local priest or town registry officer would give them a random names. Sicilians always fall into the trap of thinking they have a regal background, their pride tricks them. Any link to the ancient royal houses of Sicily is always convoluted and difficult to prove. It seems more noble to me to be named after the nets who embrace the landscape in a beautiful quilt every autumn than be part of a convoluted mostly foreign Gattopardian decadence.

The thought of an honest hard days work, is endearing to me, it seems more authentic in our modern lives which have lost their connection with the natural world. Instead of being preoccupied by chasing a fantasy, ambition, fame, or money it is refreshing to do something tangible and real. 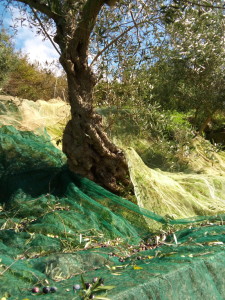 It is beautiful to embrace the olives, gently wrap them up in the nets pulling out the leaves, branches, prickly bramble vines, cleaning them and grooming them for their journey to the press which will turn them into the glorious olive oil we all love and use abundantly during the year.

Once on the nets the voluptuousness of the deep purple olives pop out in an oily watery residue, staining your hands like blood. Collecting them with patience and love, tumbling them into the fabric sacks for transport. The olives squelch as they crush themselves with their own weight, ready for their final journey.

The humble olive has made an amazing made odyssey through ancient history from their origins eight thousand years ago in the Eastern Mediterranean, to their gradual migration from the Near East, Cyprus, the Aegean Sea and the Strait of Gibraltar. The Phoenicians diffused olive trees along the Mediterranean shores of Africa and Southern Europe. The Greeks and Romans gradually bringing the olives and oil to Sicily, where it is a solid staple on the Italian table. 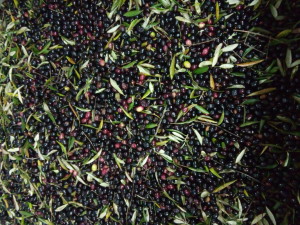 The local Sicilian olive press or frantoio as they are known in Italian, are a hive of activity in December as people rush to have their oil pressed before Christmas. The presses are often open twenty-four seven in a furious few weeks of activity as people pile up their cars and pull trailers filled with linen bags overflowing with tyrian purple ripened olives.

The sacks who once inhaled the aroma of coffee beans are now recycled to soak up the raw oil leaking out under the weight of the bursting olives. Bags are stacked up outside the entrance of each trapito as olive presses are called in the local Sicilian dialect. A cue of work starts to form and the backlog piles up along the edge of the work space. No one is ever turned away, you just wait your turn before the presses labourers load the olives into the machines.

People standing around waiting for their oil are surreptitiously inebriated by the pungent aroma of the savage oil which over comes them. The odours of an olive press in full production is like a thick woollen blanket embracing everything alleviating any sensation of the cold and impeding any possible movement.  At first the freshly pressed oil is like a mesmerising numbing shock like biting into a raw olive, but then it intoxicates you and makes you feel at home. 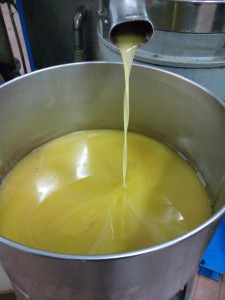 Often the new oil is taste tested at the press by roasting tick pieces of crusty bread and drenching them in the golden elixir. It is obligatory to salute the blessings of this years harvest with a celebrity drink of new wine.

After the olive harvest the fresh oil is immediately put to use at home with the family by sharing more slabs of crusty Sicilian bread sprinkled with salt and oregano and frying up savoury dumplings known as fritteli flavoured with cauliflower or anchovies.

The use of the oil is a serious undertaking as it gives a final collective vote of approval to the quality of a particular olive press, reputations are built or destroyed every year after the taste test.

If the oil is burnt or has some other defect the press will lose its clientele for the following year. If it is good it will be used abundantly to fry everything from arancini for Santa Lucia, to salted cod or Baccala’ during the upcoming New Year’s Eve feast.